#50by30: A New Target for a Decade of SDG Action for Road Safety

Every day 3,700 people are killed in road crashes and many more suffer serious injuries. Shockingly traffic injuries are now the leading cause of death for children and young adults aged 5-29 years.

The current United Nations Decade of Action for Road Safety, despite growth in population and motorisation, has helped slow the increase in road deaths. But in far too many countries the number of people dying or seriously injured in traffic crashes is rising rather than falling. With road safety now included in the UN’s Sustainable Development Goals (SDGs) much more must be done to stop the carnage on the world’s roads that kills 1.35 million every year.

Road deaths and serious injuries are not just unfortunate accidents. They are predictable, preventable, and unacceptable. Evidence shows that setting a road safety target is an effective way to reduce the number of people killed and seriously injured in traffic crashes.

“The Towards Zero Foundation’s #50by30 campaign calls for a new target to halve road deaths and serious injuries in a new decade of SDG action for road safety to 2030. A new target and a new decade of action will help to save 675,000 lives a year, accelerate progress in global road injury prevention, and work towards a world eventually free from road fatalities and serious injuries.

“Without a new target #50by30 there is a significant risk that progress in improving road safety will stagnate & reverse. If the current SDG 3.6 target is not extended to 2030 road safety will become a less important priority in sustainable development. This will undermine political commitment to road injury prevention which in turn will make it harder to mobilise new resources and action to save lives.

“That is why the Towards Zero Foundation believes it is so important that Governments around the world now make a new #50by30 commitment to halve road deaths and serious injuries in a new decade of SDG action for road safety.” 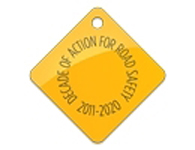