More than 78,000 lives have been saved since Euro NCAP’s tough crash safety tests were launched 20 years ago. Euro NCAP has published over 630 safety ratings, crash-tested some 1,800 cars and collectively spent over 160 million Euros to make cars safer.

The first tests exposed safety failings in top-selling family cars, forcing a fundamental rethink in the way vehicles were designed to prevent accidents and save lives. Twenty years on, 9 out of 10 cars sold on the European market hold a Euro NCAP rating and the motor industry actively supports the development of new requirements for the top safety ratings.

Today, the results of crash tests of two family cars built 20 years apart underline the huge advances in vehicle safety since 1997. Safety technologies that were non-existent or optional at most - such as driver and passenger airbags, side protection airbags, belt reminders and electronic stability control – are now standard on all cars sold in Europe.

“We are very proud - as we mark 20 years at the forefront of road safety – that Euro NCAP’s programme of safety tests has achieved major, life-saving improvements in cars and has helped Europe reach the lowest road fatality rate for any region in the world.” said Secretary General, Michiel van Ratingen.

“Euro NCAP has given millions of consumers the knowledge and confidence to choose the safest cars possible. Recent years have shown a slowdown in the progress rate, however, so we mustn’t take our foot off the gas. We want to ensure that Europe’s roads get even safer in the next 20 years, not just for car occupants but for all participants in traffic. We already test many more aspects of a car’s safety than we did when we started in 1997, and that is set to continue. Next year, we will test systems that recognise and avoid crashes with cyclists, and we’re lining up a very challenging roadmap for 2020 to 2025.”

Max Mosley, the first Chairman of Euro NCAP and Chairman of Global NCAP, winner of the 2016 Prince Michael International Road Safety Premier Award, said: “Twenty years on from what started as a controversial programme, rejected by manufacturers, and supposedly aiming for unrealistic safety standards, Euro NCAP is now firmly part of the automotive mainstream. Thousands of fatalities have been prevented, consumer demand for safety is high, manufacturers compete on safety rating results, and vehicle safety standards continue to improve.”

“The consumer awareness model deployed so effectively by Euro NCAP has not just fundamentally changed the European market, it has helped to catalyse other NCAPs across the world in middle and low income countries. Consumer pressure informed by crash tests is helping to make rapid changes in levels of safety in India, Latin America and the ASEAN region. Euro NCAP has truly had a global impact, a proud road safety legacy that has saved countless lives.” 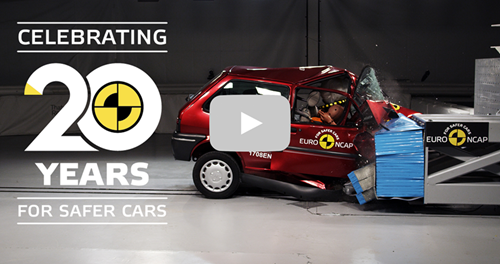 2 February 2017 – As Euro NCAP celebrates its 20th anniversary we should acknowledge its contribution to saving 182,000 killed...

12 September 2017 – Since its establishment in 1997, Euro NCAP has been the catalyst for significant and sustained advances in...

Crashing cars to save lives.

2 February 2016 – As part of the #SaferCarsForIndia campaign, Global NCAP has been performing independent crash tests on some of...

10 March 2015 – Global NCAP calls on motor manufacturers to democratize safety for all cars worldwide by 2020 . Millions of...

20 January 2016 – Consumers International (CI), the voice of the world's consumers, has joined the #STOPTHECRASH partnership led...