Intelligent Speed Assistance (ISA) is a broad term that designates various forms of driver assistance systems: the most common version provides information on the speed limit and warns drivers when they exceed it.

The most advanced ISA systems combine various data sources – for instance digital maps and road sign recognition cameras - to prevent drivers from going over the speed limit. Should they do so, their vehicles slow down automatically.

The partners from Helmond involved in ReVeAL - the City of Helmond and V-tron - intend to test this form of an ISA system. As the system can be installed in any vehicle, certain car models have already been equipped with this technology.

Additionally, V-tron has developed a retrofit toolkit to allow 'older' cars to benefit from this advanced technology. The feedback following testing on the first prototypes has been positive, with the system described as comfortable, unobtrusive and safe.

With the on-board technology ready, the time was ripe to demonstrate the impact of ISA on a residential area. On-site tests were conducted using roadside measuring equipment in the Brandevoort district of Helmond from 29 June to 10 July.

Traffic and speed measurements were conducted during the first week, with ISA vehicles gradually introduced into traffic from 6th July to 10th July. Their test drives in this time saw them following a pre-defined route within the neighbourhood.

The objective was to measure the impact of an increased penetration rate of ISA vehicles on average traffic speed, and more generally on the traffic flow, safety, and quality of life within the district.

The expected benefits of introducing ISA are numerous. Having fewer vehicles exceeding the speed limit boosts road safety and reduces the likelihood of accidents, whilst driving faster generally generates more noise pollution. This can lead to citizens regarding cars as a “threat”, too.

Higher speeds also increase air pollution. An ERTICO study indicates that CO2 emissions could be reduced by 5-10% if ISA were made mandatory. Finally, ISA allows smoother traffic flows thanks to harmonised speeds, whilst its status as a support function for drivers means it marks a small step towards connected and automated driving.

The results from the ISA pilot are being processed, with a report outlining expected towards the end of September. 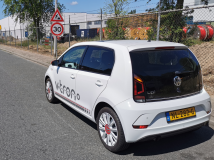 London to require ISA on all new buses from next year

ETSC advocates the use of ISA

30 October 2015 – For more than ten years, the European Transport Safety Council has been advocating the benefits of Intelligent...

Call for ISA to become standard

Majority of motorists back ISA

2 August 2022 – Fleet World reports that almost three out of four UK motorists (73%) back using in-car technology that would...

27 April 2017 – Story from Newspress. New legislation has been introduced that will dramatically change the way speeding fines...

6 July 2017 – The Speed Compliance Statistics 2016 release from the Department for Transport presents estimates of compliance...