Story from the FIA Foundation.

Rafael Nadal, Pharrell Williams and Nico Rosberg are amongst the stars featured in the first ever worldwide outdoor road safety advertising campaign, launched by the Federation Internationale de l’Automobile (FIA) and advertising giant JCDecaux, with support from the FIA Foundation.

Named for the number of people who lose their lives in preventable road traffic crashes every day on the world’s roads, the #3500LIVES campaign unites a roster of major celebrities from sports and arts with political and religious leaders in a call for political commitment and a properly resourced UN Fund for Road Safety to meet the challenge of the Sustainable Development Goals, with a focus on safe infrastructure and vehicles.

Members of the public are encouraged to support this call via a campaign website and to ‘Sign Up, Stay Safe, Save Lives’.

Translated in 30 languages, the campaign #3500LIVES is now live in 30 cities worldwide and will be rolled out in more than 70 countries by the end of 2017. In the launch phase, JCDecaux estimates that the campaign will be seen 1 billion times.

Speaking at the launch of the campaign at the Automobile Club de France, alongside Mayor Hidalgo; Jean-Charles Decaux, Chairman of JCDecaux; EC Transport Commissioner Violeta Bulc; and the UN Special Representative for Human Rights, Zeid Ra’ad Al Hussein; the FIA’s President Jean Todt said, “I encourage everyone to promote and share the campaign’s key messages and sign our manifesto for government action. Too many people lose their life unnecessarily in road crashes daily. We are proud to have worked together with JCDecaux on this campaign, and also with 13 fantastic Ambassadors, each of which is a role model, especially for young people, the group worst affected by road crashes.”

The launch event also heard video messages in support of the campaign from His Holiness Pope Francis and Thomas Bach, President of the International Olympic Committee. Some of the celebrities involved in the campaign, including Nico Rosberg, Yohan Blake and Felipe Massa, joined by live feed. Paralympic gold medalist Vanessa Low, who lost both her legs in a transport incident, attended and spoke at the launch about the impact of her injuries and the struggle to overcome them. 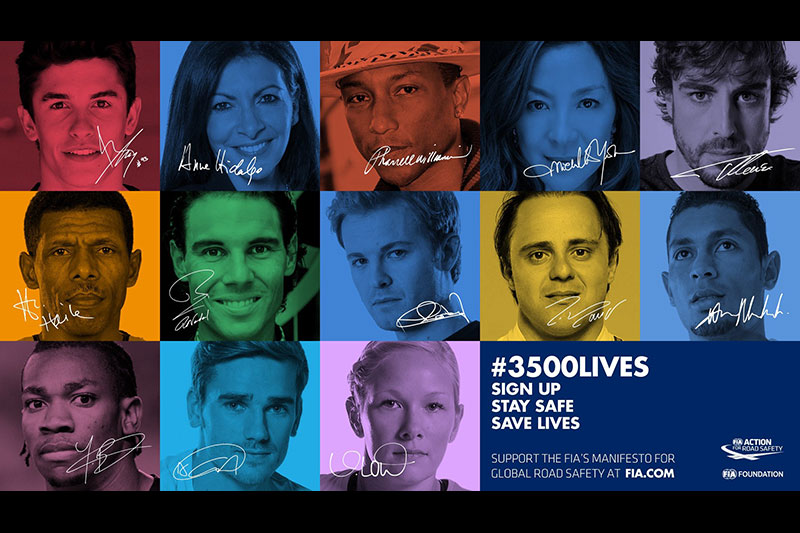 11 December 2018 – The FIA High Level Panel for Road Safety has been honoured with a Royal Award for its promotion of key safety...

31 October 2018 – Based on current trends 500 million people will be killed or injured in road crashes worldwide between now and...

21 May 2014 – This is a three-year programme agreed to improve the collection and use of traffic crash data in joint effort...

25 January 2019 – The joint Global Road Safety Initiative of the World Economic Forum (WEF) and the Fédération...

27 January 2016 – His Holiness Pope Francis has given his support to the global, which draws attention to the 500 lives of...

8 September 2017 – High level meetings in Latin America and Africa have been the latest staging posts for the campaign by the UN...

Tribute to Max Mosley founder of EuroNCAP who died recently

28 May 2019 – The Child Health Initiative has joined a new partnership of major international agencies working on child and...